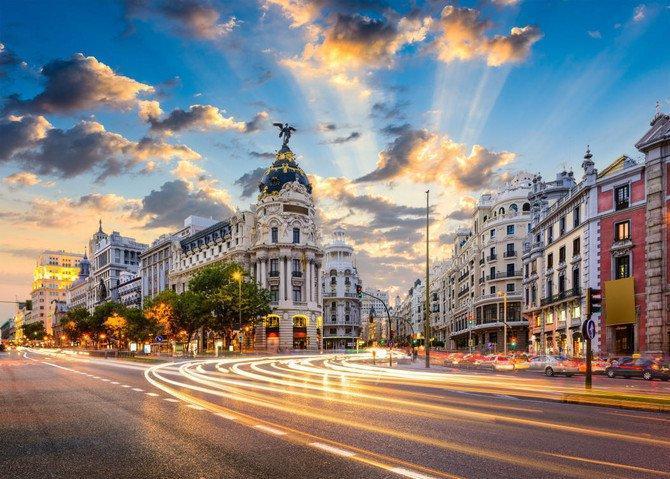 Magical Madrid: The unique charms of the Spanish capital

LONDON: It was bad luck that brought me to Madrid — or perhaps fate. Midway through a two-month road trip around Southern Europe, diligently skirting the coasts of Portugal and Spain, but with no intention of venturing inland, my 20-year-old campervan broke down in the scorching Andalusian planes, some 30 km outside Seville, officially the warmest city in Europe.

My fate was sealed by the calendar as much as the location: It wasn’t just that I blamed the searing summer sun for overheating my ancient engine, but also for thwarting any chance of its repair. For the month of “Agosto,” I soon learned, the south of Spain simply shuts down. There wasn’t a garage in town with the faintest bit of interest in fixing my motor. And so, after a fortnight of shade-seeking 40-degree days and flamenco-filled nights in Seville, I impulsively rented a car and made a spontaneous six-hour road trip to Madrid. And whatever the repair bill ended up being, I wouldn’t change a thing.

Arriving exhausted at dusk, I emerged from my air-conditioned car to find the climate completely transformed, temperatures hovering in the pleasant mid-twenties, surrounded by commuters ambling amiably to street-side tavernas rather than racing to the metro — or hiding indoors like their southern compatriots. Hurried logic (and a whiff of luck) had brought me to the south-western edge of the central Sol barrio, a maze of winding streets with colorful cafés and tapas joints that seem to be as busy for breakfast as in the early hours, entertaining a constant flow of customers and an insistent throb of lively chat. It was the perfect tonic for the breakdown blues.

Arriving without preconception or preparation had its benefits. I was free to follow whims, enjoying the kind of aimlessness which can only be bred through enforced limbo. Evenings drifted by nibbling gambas al ajillo (garlic prawns) and pimientos de padrón (padrón peppers), while practicing my newly acquired Spanish with friendly locals at Bodegas Melibea, an audaciously decorated café with wide open windows offering cooling vistas of the ever-changing street scene. Madrid’s blockbuster sights regally lived up to their generations-old hype. The Plaza Major really could not be better named — a bright rectangular space built around the turn of the 16th century, lined with interconnected regal rows of identical three-story buildings, sporting a total of 237 tiny balconies.

Grander still is the Royal Palace of Madrid, a magnificent maze of 3,418 rooms which make it Europe’s largest royal residence. Be sure to stop at the nearby Temple of Debod, an ancient Egyptian temple donated to Spain and incongruously rebuilt in the early 1970s.

I had heard of the Prado Museum, of course, and held some inkling of its famed depth and breadth, but little could prepare me for the boggling floorplan and epic catalogue of art, which stretches from the 12th to 20th centuries. At any one time, only about 1,300 of the institution’s collection of more than 20,000 works is on display — but that still means that if you entered at 10 a.m., stayed until closing time at 8 p.m., and took zero breaks, you would have the equivalent of 27 seconds to view each work. Time is likely to be considerably tighter when an extension is unveiled next year, coinciding with the Prado’s 200th anniversary. More manageable and equally essential is the Museo Nacional Centro de Arte Reina Sofía, one of Europe’s greatest exhibitors of 20th-century artists which pays homage to the country’s headline exports Pablo Picasso and Salvador Dalí — including staging the former’s epic “Guernica,” a stark, monochrome Spanish Civil War epic which rightfully ranks among the century’s greatest cultural achievements. At 7.7 meters wide, it’s a work that no postcard or textbook reproduction can do justice to — a statement which needs to be experienced in the flesh, and studied up close, to appreciate even a jot of its power, scope or intent.

Madrid is simply magical. Not in that quaint, stately, Western European way of Vienna or Prague, nor with the pretentious powerhouse vibe of Paris or London. And nothing like the crumbling grandeur of Mediterranean neighbors Rome and Athens. It’s a European capital like no other — and it’s the one I’d move to in a heartbeat. Planning on hiring a Camper? Check our prices and conditions.

We are waiting for you!!

From FURGOCASA we would like to invite you to discover the Costa Calidad on a Campervan motorhome. Two seas on one coastline -the Mar Menor and the Mediterranean- , impressive cliffs, heavenly beaches of endless white sand, lively ports and wild coves with crystal-clear water, more than 3,000 hours of sun a year and mild temperatures -even in winter- with a yearly average of more than 19ºC.