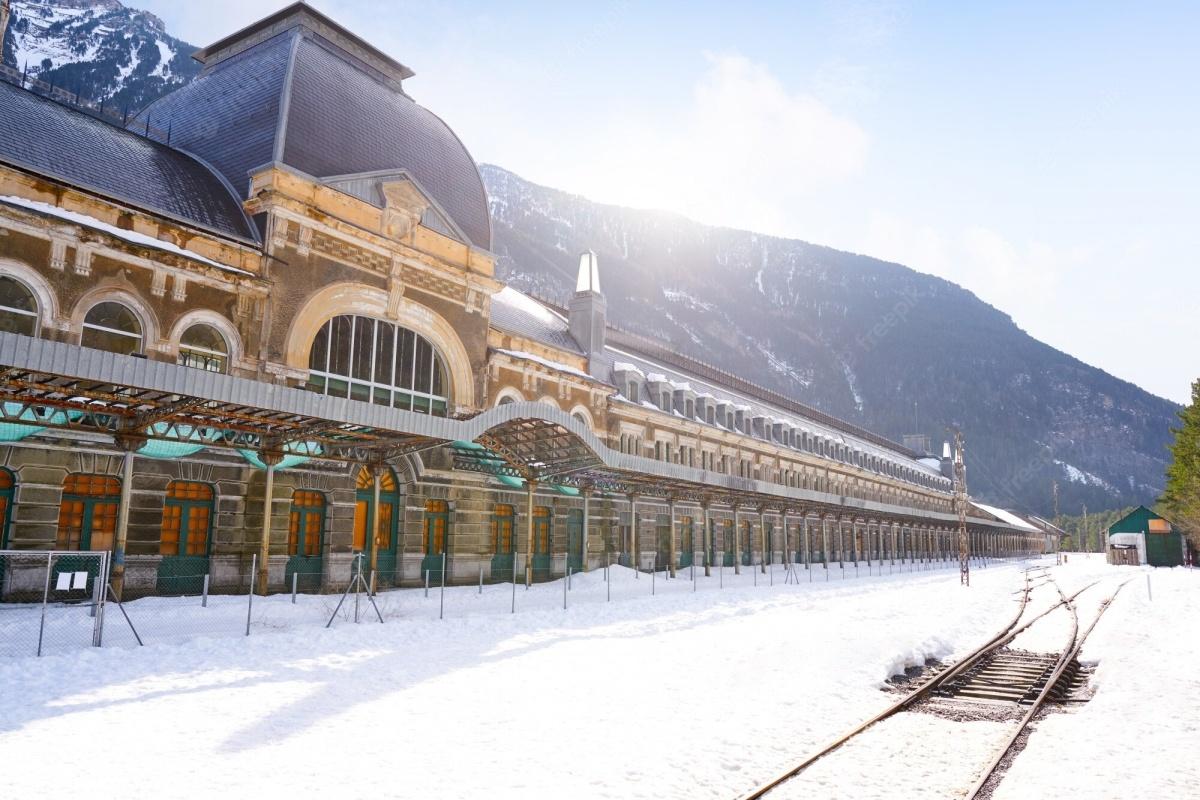 Canfranc lived on January 7 a historic day in the ambitious remodeling project of the Arañones esplanade, where the railway complex is located. If in April 2021, the then Minister of Transport inaugurated the new train station, this Saturday the development of the former railway yard was opened to the public so that residents and visitors can stroll along the new avenues and green areas. The next milestone will take place at the end of the month with the opening of the 5-star Royal Hideaway Hotel in the 1928 international station building.

Hundreds of people participated in the inauguration of this renovated space, which has become quite a party, and with which Canfranc claims its railway potential with a view to the opening of the international line to France.

The transfer of the tracks to the eastern area has freed up the surroundings of the Canfranc International Station to create the recreation area. The act of opening to the public was symbolized by opening access to the esplanade via the new pedestrian footbridge, which has been built over the Aragon River and is located 200 meters north from the Albert le Lay Bridge. From now on, there are three accesses to the esplanade: the Albert Le Lay bridge, the pedestrian footbridge and the northern access for vehicular traffic. The new Canfranc railway esplanade will include an amphitheater, a pedestrian walkway and an overnight stay area for motorhomes and campers.

The investment of 7 million euros, made by the Government of Aragon, has allowed the construction of water, telecommunications and electricity networks, and the construction of a main avenue, the Railway promenade, two secondary streets, a square, an amphitheater, a landscaped area and six parking areas, including one for motor homes, which added to those distributed in the roads, add up to 450 parking spaces.

The backbone of this space is a central walkway more than 700 meters long and 3 meters wide, which is completed with several transversal walkways. "The walker evokes the route that the Canfranero makes from Zaragoza to Canfranc, crossing plains, valleys and mountains," Soro added. In addition, most of the buildings on the esplanade, yet to be rehabilitated, will have a residential use and two of them will be used for public rental housing. The works in the urbanization were concluded several months ago, but the inauguration date was pending to resolve the negotiations with Endesa to give the light and finish off the last details. Last Thursday the last tests were carried out to confirm that all the installations are working perfectly.

The street furniture has been created using existing railway materials: five train cars, a section of original track with a turnout, an impressive bridge crane, cranes that were used to transfer goods between French and Spanish trains, a watering place that was used to feed water to the steam locomotives, levers to operate manual turnouts, a weighbridge, and so on.

The 47 lampposts that illuminate the road for vehicular traffic reproduce the original lampposts and some of the original ones are preserved next to the amphitheater.

The benches located on the walkways have been created specifically for this environment, reusing original rail from the railway tracks. Railway material has also been used for the three informative posters that have been installed, illustrated by the Aragonese designer Débora Aguelo. The vertical supports of these signs are also original rails.

At the north entrance, the old station access gates have been relocated. In the southern area, the amphitheater has been created to host cultural and social events, "evoking the orography of the mountains that the Canfranero runs through," said the minister. It is a natural amphitheater, with a grass lawn, in which two children's slides have been installed.

The railway building of the old Canfranc station will house a luxury hotel.

Next January 24 is scheduled the opening of the luxury Barceló hotel, Royal Hideaway Hotel, which has converted the interior of the railway station into rooms and lodgings.

It will be the first five-star luxury hotel in Aragon and will be managed on a lease basis by one of the 30 largest hotel chains in the world, with more than 270 hotels and 60,000 rooms in 24 countries.

Inside the historic building there will be two floors of rooms and the first floor will be dedicated to lounges, common areas and a large spa. The lobby will remain public, and will share the passageway to the esplanade and the new railway station with the hotel reception.

The Barceló group has already activated room reservations from January 24, 2023 with prices starting at 185 euros per night.